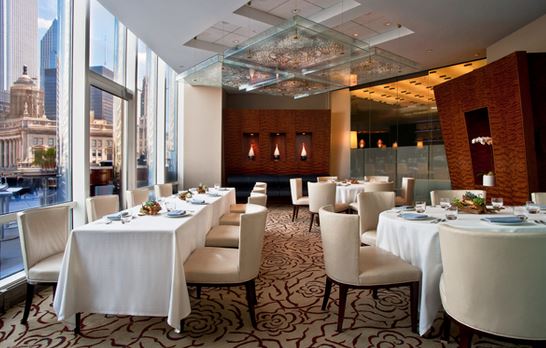 A last-minute hotel booking turned into a culinary adventure.  When we visit Chicago, we usually stay at the Waldorf, but this trip we decided to try something new and reserved a room at the Trump.  After a day of travel, we arrived at the hotel in the early evening.  We were tired and hadn’t made any dinner plans so we decided to stay in and dine at the hotel.  There were basically two options for a meal; a snack type small bite menu in the bar or the hotel’s upscale dining experience, Sixteen.

After dropping our bags in our room, we took the elevator down to the sixteenth floor.  Just steps after the doors closed, we were warmly greeted by a charming hostess, Sandy, who showed us menus for both restaurants.  One option offered burgers, sandwiches, and diner fare while the other was an elaborate fine-dining tasting experience of what appeared to be a rather pretentious prix-fixe with dishes described in over-flowery detail.  We opted for the prix-fixe.  Sandy called over the Restaurant Manager of Sixteen, Jessica, who said she would check to see if she could find us a table and if the chef was prepared for additional guests.  Hmm. I could see that Jessica took her position very seriously and that maybe, just maybe, we had stumbled into something spectacular.

After a few minute wait, Jessica returned and advised that they could offer us a table but it was banquette seating.  Not a problem for us.  She escorted us past a spectacular glass wine vault and into an even more spectacular dining room.  Floor-to ceiling windows that must have been at least twenty feet high with astounding views of the downtown skyscrapers.  Video screens at the top of the room showed head shots of staff while hip eclectic music played in the background.  Wait staff whisked elegantly among Sixteen tables, elaborately set with sparkling stemware and gleaming silver.

We sat side-by-side, looking out over the dining room and view.  Really quite astounding and almost surreal.  A menu book was presented offering us various options for main courses.  A champagne sommelier appeared with an ice-cart of superb selections, each described perfectly.  This was followed by our first waiter who explained what we were about to experience and helped us make final menu selections.  And so it began.

A series of muse bouche from the chef were delivered, each with an explanation of how they were inspired by the people who make Sixteen a success; line cooks, dishwashers, sous chefs, servers, hosts, farmers and more.  A turtle soup finished with a dash of sherry, a memory of a waiter’s time spent in New Orleans.  Pine smoked venison with cranberry and caribou moss, an homage to a long-time cook who hunted game.  A stew of bitter greens and palm butter wrapped in rice which was an interpretation of a steward’s favorite dish from his homeland of Liberia.  I can honestly say that the delivery, presentation, and taste of each dish was breathtaking.

I literally had tears in my eyes at one point, enjoying the ambiance, stellar service, and culinary genius that we were experiencing.  The wine pairings were also masterful.  Again, each with a story.  The ceiling slide show now made sense to me and it wasn’t a gimmick, it was all part of a truly brilliant story being interpreted threw every one of the five senses.  So many courses followed.

A cold-smoked foie gras with pine, matzutake and mizuna.  Roast langoustine with sesame, spinach, and Gewurtztraminer sauce.  A turbot with coquillage and coffee.  Stunning.  I really can’t detail them all, but there was not one disappointment and there were many surprises.  Even the house made breads were delivered in courses, each with an exotic butter pairing.  And, the deserts were also sublime.

An apple cake with maple yogurt, fenugreek ice cream and lemon balm.  A black walnut cake with Bordeaux soaked prunes, mascarpone and tainori mousse.  And a cheese cart with an array of artisan delights unlike any other I’ve ever seen.  I should also mention that the wait-staff was flawless.  Charles, Ramon, Keith, and Steve took such good care of us, always on hand to anticipate our needs without being over-bearing and able to answer any culinary question.  I don’t think there is more that I can say about this overwhelming surprise dining experience. Executive Chef Thomas Lents is brilliant.  Literally on my list of the top five dining experiences in my life.

The ten course menu, which is actually many more, is $175 per person.  For this level of dining it is really quite an incredible value. I should also add that the end of the meal was not the end of the evening.  Each guest is presented with a hostess gift as you are leaving the restaurant.  A smart silver metallic bag with a home-made version of a classic hostess cupcake.  We enjoyed ours back at our suite in front of the fire place still reveling about a truly magical night.