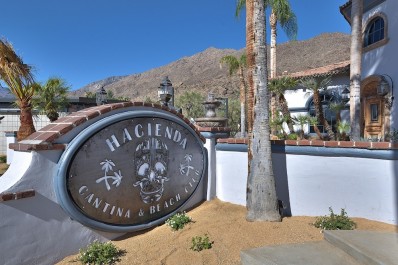 The much anticipated Hacienda Cantina & Beach Club recently closed just weeks after opening. I can understand why. Not only is the concept of a beach club without a hotel located in a parking lot next to a department store that caters to seniors a seemingly absurd concept, but the food, atmosphere, and service were lackluster and destined for a failure from the start. I must admit that we only went to the Hacienda for weekend lunch so I can’t give comment on the dinner service, so keep that in mind when reading this review. However, there were so many major things wrong with lunch that it’s almost embarrassing to detail. When we arrived, we parked in the lot and walked thru the back. Only a few people at the very small pool with a massive outdoor lounging area.

Odd on both counts. We walked around to the street entrance (the back entrance was closed) and entered into a cavernous space with a host station with no one to greet us. The theme was “day of the dead.” Murals of skulls, zombie-like women, and what looked like corpses adorned the walls. Perhaps a premonition. After a few minutes, someone came out and asked if we would like to sit in the bar or dining room. We looked into the bar and found it noisy and cold (even with only a few patrons) so we elected for the main dining room. We were seated in extremely uncomfortable metal chairs with no cushions (probably to accommodate wet diners from the pool) in a space that had ceilings that were so high it practically echoed. It must actually cost the Hacienda a fortune to keep the place cool. The menu was fairly stark at lunch but offered a number of appetizers, tacos, tortas, and salads. We opted for a mix of small plates so we could fairly sample the cuisine.

We started with guacamole, which is always a good indicator of the overall menu at a Spanish themed restaurant. A bowl was brought to the table with sides of various salsas and a basket of oily house-made chips. Seriously oily chips. The kind that slide out of your hand and leave finger prints on your napkin. The guac was totally bland and, even when dressed up with the salsa sides, was not worth ordering. The next course was Chorizo Corn Fritters. At this point, we asked for small share plates as we had more small dishes on the way. The waiter apologized, but said they had no small plates. Our options were large plates or small saucers. What restaurant that serves tapas doesn’t have small plates? We opted for the tiny saucers. But, back to the Corn Fritters. They were more like balls of corn flour that had been deep fried. No corn. No chorizo. Just oily, floury balls. Another disaster. Duck tacos followed this course. They were greasy and smelled a bit off. There was no way that there was duck in these tacos. I quickly deconstructed one to find a small pile of fatty pork spread across the bottom of the corn tortilla. I called over the waiter.

He agreed it was pork. It was inedible. Finally, the Yellowtail Ceviche. Our last hope. Our waiter arrived with a bowl of what looked like white onions and cilantro. No yellowtail visible at all. However, after close inspection we did find what amounted to a total of one teaspoon of yellowtail amidst a cup or so of onions and cilantro. Another disaster. Our waiter couldn’t help but notice that we had hardly touched our food. We rejected take-out boxes. He brought the bill. $50+ for two iced teas and four pathetic “small” plates on large dishes. Adding insult to injury, we were charged for “duck” tacos! The announcement of the restaurant closing advised that it was just temporary to re-tool the food and drinks menu and fine-tune the Hacienda experience. The promise was a re-opening in late September...which it did.  Open again for a short period before finally closing for good.  It's also now part of a financial scandal  What a wipe out.  Did I mention that we both ended up sick the last time we dined there?